Our Journey to Cape Town, South Africa Starts from All Saints/Ashmont in Dorchester.


A visit to an orphanage
The chorus visited an orphanage called the Leliebloem House. The children were loving and caring with these kids, playing with them and hugging them.
Please stay tuned to YouTube and our website for new posting from South Africa!
Posted by Boston City Singers at 10:30 PM No comments:

The last big concert for Boston City Singers was today and was wonderful! Chaperones and singers assembled at St. John’s the Evangelist in Crawford, had supper and our last concert.  The University of the Western Cape Chamber Choir again joined us again, which was our great pleasure!  It was a joyful and very well received concert, and “Walk in Jerusalem” was a highlight, which the UWC singers want to add to their own repertoire.
Posted by Boston City Singers at 10:29 PM No comments:

We have had a successful and hard-working day:  three hours this morning in a recording studio (and three hours yesterday afternoon, too).
Tonight the 34 remaining singers sang at Temple Israel in Green Point. Four of our singers and a chaperone have departed for home.
Posted by Boston City Singers at 10:28 PM No comments:

We spent three hours at the botanical gardens where we were given a fun tour and had a picnic lunch. 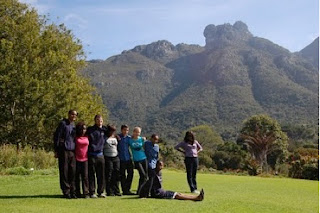 The singers spent the rest of the day in a recording studio working on a CD.
Posted by Boston City Singers at 10:27 PM No comments: 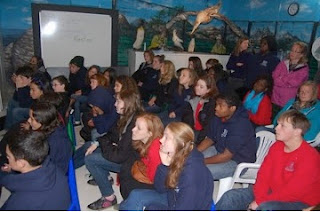 Today we drove to the SANCOB Bird Rehabilitation where we were entertained by Weston with an adorable, dancing rock hopper penguin, which had a stellar “Michael Jackson” hairdo.  We also learned all new cool interesting facts about all kinds of birds like the cormorant, and the cape gannet, and of course the cute adorable penguins.  After petting the penguin, we got a view of the home for all the birds and learned a few of the stories of how they got there to the rehabilitation center.  We also sang the staff a quick version of “Tocholosa.”  After a quick stop for lunch we were off to our last primary school visit. We shared our music and songs and we got to mingle. It was so much fun to learn about their culture and then comparing them,  A few of the children got to talk about the differences of sports between South Africa and the U.S .
Posted by Boston City Singers at 10:24 PM No comments:

National Women’s Day
“When you strike a woman, you strike a rock.”  I heard this expression on South Africa’s national holiday, Women’s Day.   On August 9, 1956, about 20,000 women marched to the Union buildings in Pretoria to protest against proposed amendments to the Urban Areas Act of 1950.  This act was meant to “tighten up control of movement of African women to town, registration of their service contracts, and a compulsory medical examination for all African women town-dwellers,” (Walker; 1982: p.129)  Now August 9th is a national holiday to celebrate and recognize the triumphs and struggles of women, past and present. 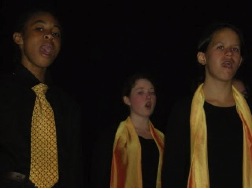 Today we performed at St. George’s Cathedral.  We got an indication that this would be a special day when the three women who work at the retreat center asked to join us on the bus to attend the service at the big cathedral. Thanks to our wonderful guides who laid the groundwork of our tour, we had a prominent role at the service. We sang three pieces of music to a packed cathedral of approximately 2,000 people including the Archbishop of Cape Town – the Most Reverend Dr. Thabo Makgoba.  Also in attendance were two other South African bishops from the region and, the Archbishop of Melbourne, Australia. 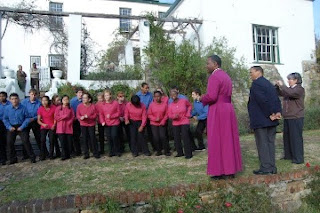 We had an unexpected and extraordinary visit today with Archbishop Makgoba at his residence called ‘Bishop’s Court’.  What was unexpected for me was the meaningful and sincere connections His Grace made with the singers.  Particularly when he learned that we had 5 or so singers whose families were from Haiti.  He told us a deep personal story of when he visited Haiti after the earthquake.  He told how the despair and destruction that he witnessed was so difficult for him personally that he believes his life was changed profoundly as a result.  He works very hard today with earthquake relieve efforts and told us of an upcoming fundraiser he’s planning this September.  When a few other singers gathered around to hear his story, he asked us all to please look at his pictures.  There we were about 12 singers gathered around his personal PC and he showed us pictures of his time in Haiti. What was supposed to be a quick 30-minute audience turned into a 90+ minute visit.  The singers couldn’t seem to stop talking to the Archbishop and I believe the feeling was mutual. 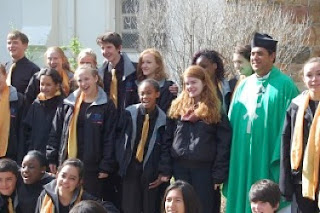 A message from one of the singers . . .
Truth and Reconciliation
The majority of our stay in Cape Town has been spent at St. Raphael’s (pronounced as “St. Raffle’s”) retreat center right outside of the city.  Many of us have spent a lot of time roaming around St. Raphael’s grounds, which are beautiful and wild.  At one of our evening meetings we learned that St. Raphael’s has an auspicious history: it was the site of the first meetings of the Truth and Reconciliation Committee.  The committee was created by Archbishop Desmond Tutu after the end of apartheid to document the atrocities of that era.  Archbishop Tutu wanted to create an environment in which the truth about apartheid could be openly documented without fear of retribution for whatever crimes occurred.  It was a monumental idea in that it showed that the only way for people to move forward from those horrible experiences was through truthfulness and forgiveness.

Posted by Boston City Singers at 10:23 PM No comments: